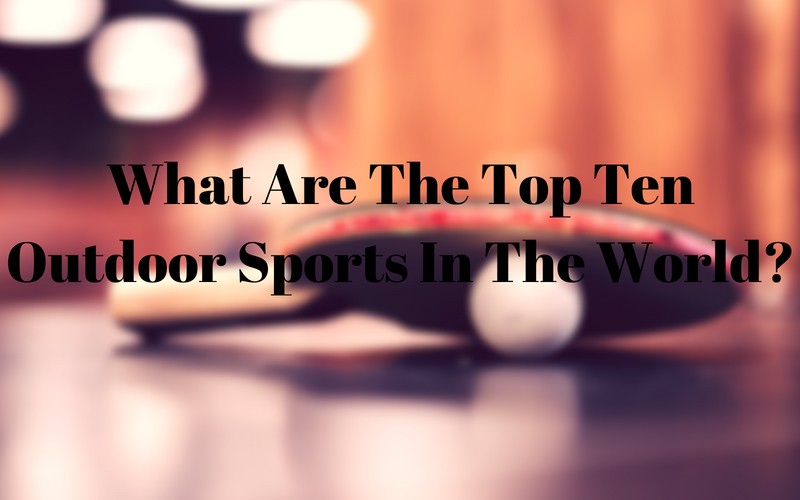 What Are The Top Ten Best Outdoor Sports In The World?

Outdoor sports are real fun. But they are not only the source of fun but also the practice

of physical exercise. That’s why outdoor sports are more popular then indoor games.

Outdoor games are loved by people of all ages. But it is really a matter of sorrow that day by day the playgrounds are shrinking. As a result, children cannot play outdoor games as their wish. Also the impact of the motion of technology is another reason for making children addictive to the indoor video games. Now let’s talk about top 10 best outdoor sports of the world.

Remember these lists are not based on ranking. It is just a list of top 10 outdoor games of the world.

Cricket is one of the most favorite games in the world. It is actually a kind of outdoor game where your whole body gets the opportunity of getting physical exercise. 11 players from each team play the match. Two teams will play and the final score of the match will be determined as the runs or the wickets of the chasing team. Total number of 3 umpires will observe the match.

The FIFA world cup is called as greatest show on the earth. So you can easily guess the popularity of football in the world. Total 11 players from each team play this match. This game is also among two teams and a referee with two linesmen will take care of the match. We all know Messi, Ronaldo, Neymar and others from football.

Hockey is also one of the most popular games in the world. Here 11 players from each team, total two teams play the game. The equipment for this game is a hockey ball and a hockey stick for each field players. The goalkeeper here is dressed in such a way that he can protect the hockey ball with his body. Here you will have a referee who will take care of the match and his decision will be the law in the match.

Table tennis is played on a table. It is a kind of shorter version of the game tennis. It is played between two or four players. The match is called single when the match is held between two players (one player from each team) and the match is called dual when four players (two players from each team). Both male and female can play this match. The size of the table for an international table tennis match is 2.74 meters long, 1.525 meters wide and 76 cm high.

Frisbee is a toy which one is played by throwing them in a long distance. The toy actually flies by using the air. It is also called as the flying disc or normally as disc. Generally, it is plastic made toy with a diameter of 20 to 25 cm. It is really a good way of throwing exercise.

Tennis is the royal game of all outdoor games. It is really a hard working game for players because you have to run along the tennis court for the whole time and also have to smash the tennis ball with your own tennis bat. Good exercise to burn fat and lose weight. But the game is kind of complicated to understand at first. The smashing will also may not be accurate in the beginning.

I will say that golf is an elite class game. One of the best choice for rich people of course. The golf court is that much huge that you have to travel to one place to another by a golf cart. Golf is a very popular option for every businessmen and office workers in their holidays. You need much stroke in your hand to heat a golf ball to the furthest distance.

Rugby is a world famous game. This game is held between two teams. Each teams having 13 players and union of 15 in a league. Rugby is a game of strength. It is the test of your strength and ability actually. You can actually tell this by just watching a professional rugby player. A lot of hard work needs to be done to maximize your strength for becoming a professional rugby player. Also you can organize the match between children. But this game must be held under the guidance of a referee.

I think everybody have heard about NBA and Michael Jordan. So you know what basketball really is. It is a top popularity having game across the world. Almost in every college you will see a basketball ground. Two teams take part in the match. Total 12 players play in each team. 5 players of the team will be playing in the ground and the other 7 members will stay on the bench as reserved players. Their destiny will be putting the ball in the basket. The match will be decided from the scoring and according to points. Points will be determined according to the shot in which the ball was put in the basket.

All outdoor games are literally fun. They are also good for health. But the matter of sorrow is the scope of playing outdoor games is reducing gradually. It is high time we reconsidered the facts around this problem to make a solution. The list is actually made from writer’s own point of view. Of course there are also some good outdoors game well. Let us know your top ten list. Thank you.

I’m Harry Wheeler. My meditation is to present the real scenery of things with what I deal for my guests on my site. Completed my graduate in English and making my way through a beautiful service in my speeches that thrill people in reading my stuff written for them.

Any cookies that may not be particularly necessary for the website to function and is used specifically to collect user personal data via analytics, ads, other embedded contents are termed as non-necessary cookies. It is mandatory to procure user consent prior to running these cookies on your website.